Affirmation:           I am Master of Numerology and Mathematics

Known as the first pure mathematician, he made many scientific and mathematical discoveries. It is believed he was the first person to call himself a philosopher.

One of Pythagoras’s main beliefs was that all souls are immortal and that, after death, a soul is transferred into a new body. He maintained that the planets and stars move according to mathematical equations, which correspond to musical notes and thus produce an inaudible symphony.

When Master Pythagoras was asked why humans exist, he said, to observe the heavens, and he used to claim that he himself was an observer of nature, and it was for the sake of this that he had passed over into life.

Spirituality:         Pythagoras powerful spiritual teachings hold sacred codes from the God source. Through numerology he could see sacred numbers that relate to behaviours and understanding of the human psyche.

The Painting:       Pythagoras is shown as his powerful self through the gateway of numbers to bring through the geometry and numerology, unified with the sounds of the sacred light of source – God.

This portal will open you to working with numerology and the sacred numbers bringing awareness into your life. 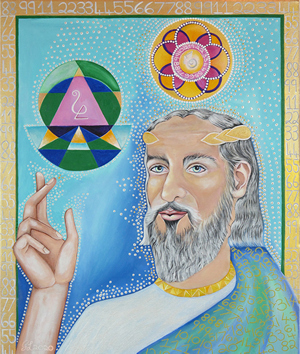