Affirmation:       I am the creation of language through divine channel.

History:             An Atlantean Priest-King, Thoth founded a colony in ancient Egypt after the sinking of the mother country. He was the builder of the Great Pyramid of Giza.

Worship of Thoth began in Lower Egypt most likely in the Pre-Dynastic Period (c. 6000-3150 BCE) and continued through the Ptolemaic Period (323-30 BCE), making Thoth’s veneration as among the longest of the Egyptian gods or any deity from any civilization.

Revered in Egypt for thousands of years and even the Greeks admired him so greatly that they credited him as the originator of all knowledge on earth and in the heavens.

Thoth is the creator of written language and the literary arts both for humans and the gods.

Spirituality:      The soul of Thoth is said to have incarnated three times, in his last being known as Hermes, the thrice born. As Hermes, it is believed he wrote ‘The Emerald Tablets’.

The Emerald Tablet is believed to be Thoth dividing his knowledge into 42 plates of emerald, codifying the great scientific principles ruling the Universe.

Thoth is known as the ‘Lord of Divine Words’ and as a just and incorruptible Judge.

Painting:         The presence of Lord Thoth is shown in his revealed true self as an Atlantean High Priest and King. Holding the Staff of Light to guide us with Universal wisdom.

The Emerald Tablets in light language coded from the Universe is directed by source as he is divine channel of language and communication. 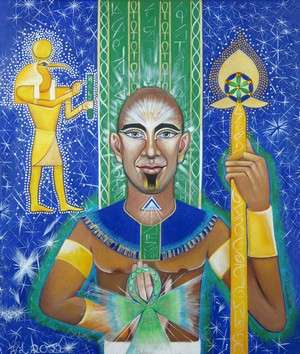