History:                     Pallas Athena was the daughter of Ancient Greek God of the sky, Zeus, produced without a mother, so that she emerged full-grown from his forehead.

Athena essentially succeeded her mother and became the new goddess of truth and wisdom. She was equipped with helmet, spear, and shield, thus a warrior-goddess as well.
In her aspect as a warrior maiden, Athena was known as Parthenos. Athena’s most famous temple, the Parthenon on the Athenian Acropolis, takes its name from this title.

Spirituality:                Lady Pallas Athena is a twin-flame of Master Hilarion, they work together in conjunction with Athena on the Karmic Board and Hilarion on the Galactic Counsel.

They are interested in the focus of science, integrating with spirituality, dissolving skepticism, with trust, truth, and knowledge.

Pallas Athena is holding the 55 laws in our Universe for our planet earth. To connect through all the Rays that are held in the planet Saturn.

The Painting:             Athena is shown with her hands open with the codes of light, directed into everyone to receive the truth.

She holds focus in her awareness to heal the insecurity around childhood with Truth and Trust.

The owl of wisdom with her and her sword of light remove misalignment of Truth. 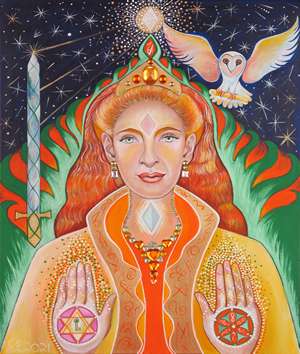