Nostradamus began medical practice despite there being a belief that he never earned a medical degree. He became known for innovative medical treatments during outbreaks of the plague.

Spirituality:            French astrologer Nostradamus was a physician, the most widely read seer of the Renaissance.

It is believed that Nostradamus experienced a psychic awakening. One of the legends says that during his travels in Italy he came upon a group of Franciscan monks, identifying one as the future Pope. The monk, called Felice Peretti, was ordained Pope Sixtus V in 1585.

He began making prophecies and published a book entitled Centuries. Astrology was then at a peak, and an enlarged second edition, dedicated to the French king, appeared in 1558.

He planned to write 10 volumes, which would contain 100 predictions forecasting the next 2,000 years. In 1555 he published Les Prophesies, a collection of his major, long-term predictions.

Possibly feeling vulnerable to religious persecution, he devised a method of obscuring the prophecies’ meanings by using quatrains—rhymed four-line verses.

Nostradamus claimed to base his published predictions on judicial astrology—the art of forecasting future events by calculation of the planets and stellar bodies in relationship to the earth.

The Painting:              Standing in the gateway of the Stairway of Ascension, Nostradamus is showing us the gift of seeing, from present moment to the past and future events.

The orb of the eye of Horus is showing as a direct portal to the beyond. 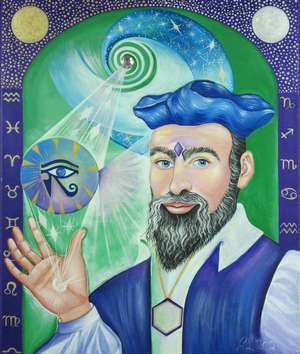