The story of the Churning of the Ocean tells of how the gods worked together to churn the ocean. They churned for many years, but it was 1,000 years before anything rose to the surface. Finally, the treasures began to rise to the surface. Among them, a beautiful woman standing on a lotus flower. This was Lakshmi, who had returned to the world. With her presence, the gods eventually defeated the demons and chased them out of the world.

Spirituality:               She is the resplendent goddess of wealth and prosperity who provides the beings with all kinds of material abundance. She is a protector as well as she bestows upon deserving people according to their past karma and degrees of devotion. She also protects from ill health and adversity.

The Painting:              In the painting of Lakshmi she is standing on the Golden Lotus of eternal wealth for humanity. She has 9 diamond orbs that are activated from the causal Chakra that surrounds her. They spin around her from the 9 dimensions opening for wealth from source to flow through her. She stands in the golden gateway. 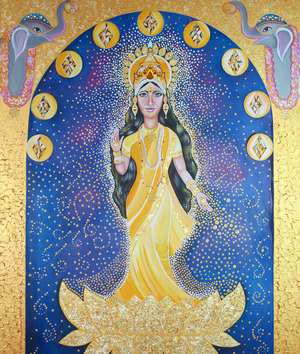