History:                        Osiris, Isis and Horus are very key characters in the ancient Egyptian culture and their story
is truly beautiful. Osiris was Egypt’s greatest king who ruled through kindness and persuasion. Having civilised Egypt, Osiris travelled to other lands, leaving Isis as his regent.

In Egyptian and Spiritual beliefs, Isis is associated with funeral rites, but as the enchantress who resurrected Osiris (after he was dismembered) and the mother of Horus, she is also a giver of life, a healer and protector of Kings. She was known as ‘Mother of God’ and is often represented with a throne on her head. During the Roman period her cult spread throughout Greece and the Roman Empire. The temple of Philae in Egypt includes the temple to Isis.

Spirituality:              Divine Mother – goddess of wisdom and magic. Isis is working on the planet to help us to bring ‘balance’ into our lives. She is working with Saint Germaine and Master Serapis helping to clear dis-harmony from conflict.

Isis is one of the Masters originally from Atlantis who went to Egypt with Osiris. Osiris and Isis are an Ascension Couple. 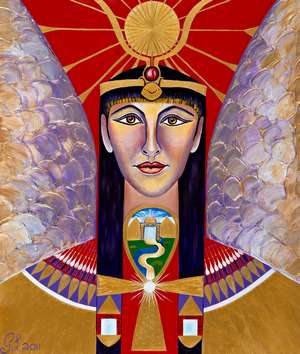